Can All 7+ Billion of Us Live the "Good Life" Sustainably?

The answer from a 2018 study, A Good Life for All Within Planetary Boundaries, is a resounding “No.”

Study co-author Dan O’Neill notes that not even a single country is meeting basic needs and providing a good life for its citizens while living sustainably within ecological limits.

He asks us to:

“Imagine a country that met the basic needs of its citizens – one where everyone could expect to live a long, healthy, happy and prosperous life. Now imagine that same country was able to do this while using natural resources at a level that would be sustainable even if every other country in the world did the same. Such a country does not exist. Nowhere in the world even comes close.”

The authors used the ideas of Kate Raworth’s “doughnut economics” to frame the results of their study. The framework combines the concept of ecological planetary boundaries with the concept of social boundaries. It visualizes sustainability in terms of a doughnut-shaped space where resource use is high enough to meet people’s basic needs as defined by the UN’s Sustainable Development Goals (the inner edge of the doughnut), but not so high as to transgress planetary ecosystem boundaries (the outer edge of the doughnut). 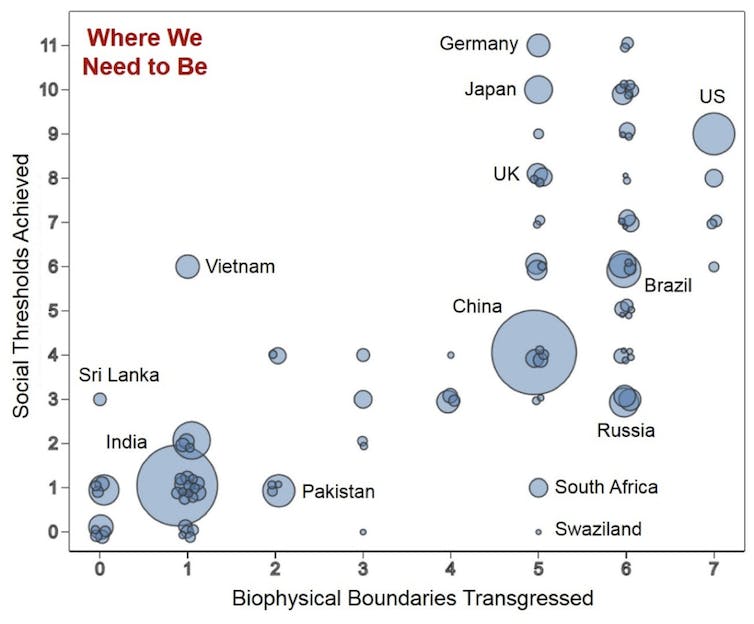 The researchers conclude that basic subsistence with enough calories, sanitation and primary education may be possible for 7 billion (note that the number of 7 billion they use is lower than the estimated 7.8 billion population of today). But what is not possible are the longer, healthier lives; secondary and higher education; higher life satisfaction and general welfare that are associated with a “good life” in many developed countries.

Sustainable population advocates often hear the argument that the planet’s sustainability crisis is due only to overconsumption – not overpopulation. It’s certainly true that many of us in developed countries could consume much less and still lead good lives.

But there is a profound lack of understanding of how drastically most of us in richer countries would need to reduce our consumption to live sustainably if we all shared the Earth’s resources equally.

According to the study’s authors (on their website), the standard of living that would need to be shared across the entire globe to stay within the 9 planetary boundaries (at 7 billion population) would include:

Such a world sounds horrific to most of us. And unfortunately, the social goals with the highest associated resource uses – ranging from about 2 to 6 times the per capita biophysical boundaries – are goals that many of us would deem essential for a “good life” – democratic quality, economic equality, secondary education and higher life satisfaction.

We sustainable population advocates need to show the “it’s all about consumption” critics a realistic presentation of how low consumption would need to be in order to live sustainably on the planet. The fact is that without a much lower population on the planet, virtually everyone will be doomed to living at a very low standard of living on an ecologically ravaged planet.

As David Roberts, energy and climate reporter for Vox notes, “Study after study finds that the primary determinant of a person’s actual ecological footprint is income.” That’s because most people spend most of their income – and when money is spent on goods and services there are resources used and pollution created. The standard of living associated with the “good life” is made possible by a high level of income.

According to data from the Good Life study, the countries of Morocco, Guatemala, and the Philippines approximate the levels of social indicators that could be shared equally across the globe if we did not transgress any ecological planetary boundaries. According to the World Bank these countries had an average per person income in 2017 of around $8,000. The average in the U.S. is over $59,000 while the average in countries of the European Union is over $41,000.

Most of us would consider a European standard of living to be high enough to live the “good life”. But it is still over 5 times the average income of the 3 countries (Morocco, Guatemala, and the Philippines) that closely approximate the social standard of living an equal world of 7+ billion would need to share.

This low level of income of about $8,000 person suggested by the Good Life data is supported by data from the Global Footprint Network’s ecological footprint research. The Network’s ecological footprint data estimates we are using 1.7 Earths to produce goods and absorb wastes. Using a little (but not too much) math we can plug in the global average income per person of about $17,000 (World Bank) and assume this is 1.7 times too much consumption per person if we hope to consume just 1 Earth.

Smaller Families Can Allow Everyone to Live the ‘Good Life’

The authors of the Good Life study note that the social and physical “provisioning systems” determine how efficiently resource use turns into social outcomes. There’s no doubt that we can make many social changes to turn away from our current growth obsession and toward more satisfaction with “enough". And, while the social transformation to a culture of “enough” needs to begin now, it’s also true that people choosing smaller families now is one form of “enough” that doesn’t have to wait on widespread social and economic changes to begin.

Ultimately, our total impact on the planet is the number of people multiplied by the consumption of each person. If we can lower the number of people in the equation, over time we stand a much better chance of providing many more people “the good life” which many of us in the U.S. and the (over)developed world have been able to enjoy.

If we achieved a one-child family average for 100 years, the population would decline to nearly 2 billion people – about ¼ the current population. We could live within biophysical boundaries with less resource extraction, pollution, and species extinctions. A much lower, more sustainable population level would allow more people to live good lives on a healthy planet.

Alan assists with website research, newsletter writing, social media, podcasts, and public presentations. He understands the crucial role that population balance must play in creating a more sustainable future. In addition to population issues, he follows the unfolding and intertwined financial, energy, and environmental crises and the broader predicament they point to: the impossibility of infinite growth on a finite planet. Read more about Alan Ware, Research, Writing, Speaking

Home > Articles > Can All 7+ Billion of Us Live the "Good Life" Sustainably?

Our Vision to Solve Overpopulation.